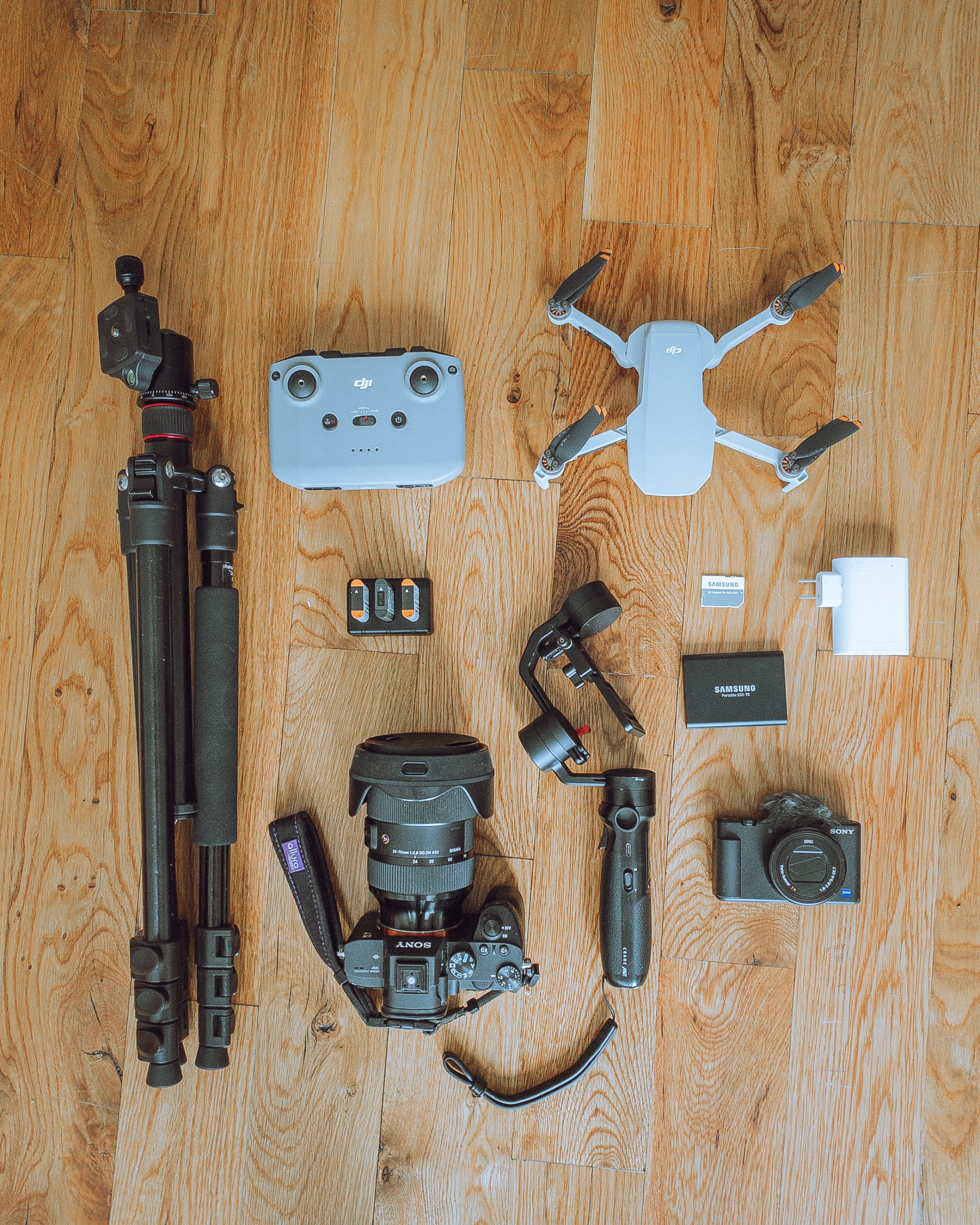 Hey, Maxim is here. Opal asked me to write an article on the gear that we used to capture our Puerto Rico travel and that we use on a daily basis. Below, I will walk you through the cameras, lenses, equipment and additional accessories that we use to capture all of our content and give you my thoughts – things that I like and don’t like about all of them.

Quick Note: We are not sponsored by any of the brands on this list, but we do use affiliate links. If you use these links to buy something we may earn a commission.

Best for Photography: Sony a7 III

Stuff I like:
Ok, so like most people getting into photography at the turn of the century, I started shooting with Canon and fully bought into the #CanonFamily. I’ve had a lot of cameras from the 70D to 5D MK IV. However, once mirrorless cameras came on the scene, Sony had the upper hand and I decided to switch and now I am fully #TeamSony. What I love about this camera is :

– Size. It’s smaller and lighter than the 5D MK IV + because it’s fully digital there are no moving parts inside.

– Auto Focus. Honestly, this was the biggest reason behind my decision to switch. Auto focus on this camera is ridiculously good. Just have your subject walk towards the camera, snap away and you can be certain that 90% of photos will be clear and in focus. Many of the traditional DSLRs would be happy with a 60% success rate.

– Full frame. Full-frame cameras have a larger sensor inside of them than APS-C cameras like Canon EOS 60D or Sony Alpha A6100. A bigger sensor basically means more light coming into the camera, so you can shoot in darker environments and you will generally get more details and less noise in your photos. Always look for a full-frame sensor in your cameras.

Stuff I don’t like:
– Lens options. Even though the camera itself is small and light, it doesn’t stay that way when you put a lens on it. Most Sony lenses are bulky, heavy and expensive. However, alternatives from companies like Sigma and Tamron have been released to compete with Sony in recent years.

– Video. Not the best camera for video. Maybe it’s my lens not having an in-body stabilization, or maybe it’s the weight of the camera, but all of the video that I film comes out shaky. Which takes forever to edit in post. Good thing, Sony released a great little camera just for videos…

Stuff I like:
Now this camera is super small and portable. It has a built-in 24-70mm zoom lens so you can film most of everything and not have to worry about attaching heavy and bully lenses. It shoots in 4K which is crazy to think about for such a small size and honestly the video quality is pretty great – plenty enough for Instagram or Youtube. Here are some of the features that also stand out to me:

– Product Showcase. This is a really cool feature that makes it easy to shoot product reviews. The focus of the camera switches between your face and the product when you place it in from of the lens to literally “showcase” it. And focusing on Sony ZV-1, in general, is great – quick and snappy.

– Flip-out screen. Very convenient when vlogging or filming on a tripod.

Stuff I don’t like:
Battery life is pretty terrible. Which is definitely a trade-off with the small size of the camera. You can get maybe 30-40 minutes of straight video footage on a single charge which might be enough for a vlog video or a travel walk-around but definitely not enough if you want to talk to the camera for an extended period of time. The solution here is to carry around some spare batteries that are thankfully small and easy to change (see my battery recommendation below).

Stuff I like:
Can’t decide whether to shoot wide at 24mm, full body at 35mm, close-ups at 50mm or portrait at 70mm? You could carry 4 different lenses and have to switch between them or you can get a single zoom lens that will give you all of these ranges (and everything in between). Sigma lenses always have a premium build quality of metal, glass and plastic. Their “Art” line lenses are sharp and 1/2 the price of Sony and Canon lenses.

Stuff I don’t like:
Like most zoom lenses, it’s big and bulky making all of the advantages of a small camera body disappear.

Stuff I like:
This drone is super small and easy to travel with. By the time you start unpacking a larger drone from its protective case, the Mini 2 is already set up and ready to go. It’s also really easy to back up photos and videos you’ve just shot on your phone and share them using the DJI software.

Stuff I don’t like:
Video quality could be better but that’s the trade-off with having a smaller drone and a smaller camera. There’s no feature to auto-follow the subject which DJI offers on their other drones.

Stuff I like:
– Just like other things on this list, it’s also small and portable which makes it perfect both for everyday carry and travel. It’s easy to set up once you get a hang of how to balance it (which does take some practice). You can use it with both a phone or a small video camera like the Sony ZV-1. If you want to use it with anything larger, go for a model that can handle more weight.

Stuff I don’t like:
The Zhiyun app is a bit buggy – I am still trying to figure out how to connect it to the camera to use additional features like zoom and record/stop straight from the stick.

Stuff I like:
Great build quality and much cheaper than its more famous Manfrotto cousin. A 360-degree ball head is a must when picking a tripod as it allows for the most flexibility. Can be used as a monopod with a single leg that pulls out.

Stuff I like:
– When buying SD and MicroSD cards, make sure to go for cards with U3 speed. They are ~3x faster compared to the U1 class, which lets you record 4K video and shoot faster photo bursts.

– I also like MicroSD cards over regular SD cards because they all come with an adapter that lets you use them where you would normally use an SD card – almost all cameras. And you can also use them for stuff that requires MicroSD cards – like drones and GoPros.

Stuff I like:
This is an inexpensive option to add battery power to the Sony ZV-1. Comes with a single adapter that can charge 3 batteries at once. Handy red led light means the battery is charging and green means it’s charged and ready to go.

Stuff I don’t like:
Doesn’t last as long as the original Sony battery. But for 1/2 the price for 3 batteries, its price makes it worth it as a backup battery option. 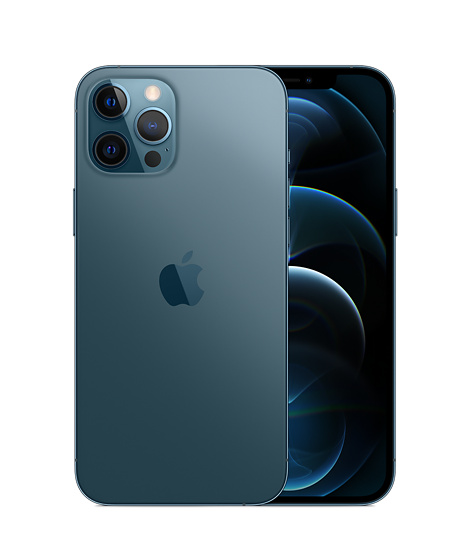 Stuff I like:
Overall, great photo and video quality, which only gets better with each new iPhone model. Instagram plays better with iPhone videos than those shot on Android, even with an excellent Google Pixel camera. Until Android and/or Instagram fix that, iPhone will continue to be the preferred video taking and sharing device for social media. The Apple App Store also typically has more creative and editing apps than Android.

Stuff I don’t like:
iCloud storage is more expensive than Google’s. Locks you into an Apple ecosystem.

Stuff I like:
Charge all of your travel gear at the same time with this charger. Just bring spare wires – thunderbolt, USB-c and micro USB and you should be covered. Save space by leaving extra charging bases at home.

Stuff I don’t like:
Does not work for anything without a USB port on one end like DC chargers. 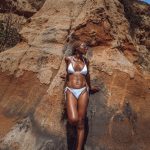 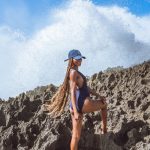 I get a ton of questions from you Gems wanting to

bringing the summer heat into fall with this fiery

Keeping it casual by styling this suit with sneake

My visit to the @blackinfashioncouncil discovery s

Underwater at the @ph5official SS23 presentation -