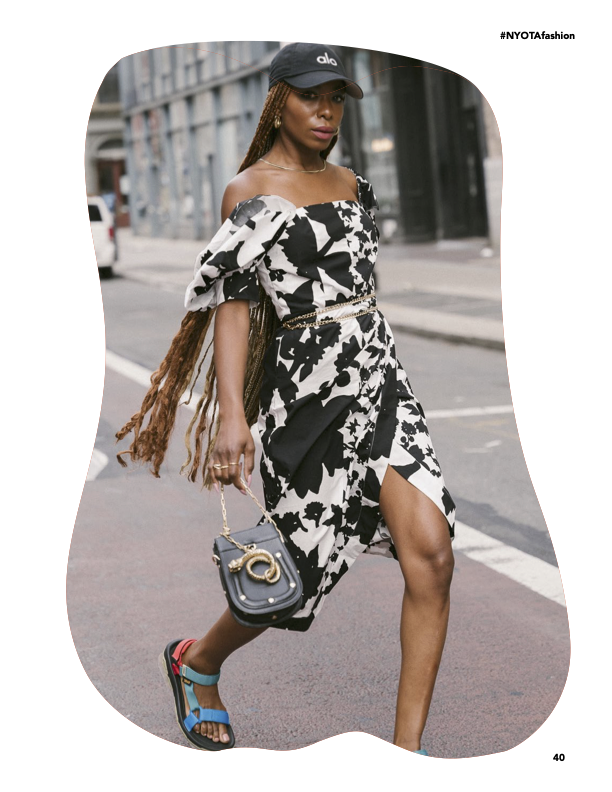 Get NYOTA Magazine Issue #27 at issuu.com

Opal Stewart, known by her over 30,000 Instagram followers as OpalbyOpal, is a New York-based fashion, lifestyle, and beauty blogger who has been creating and sharing content for over ten years. Stewart talked to NYOTA about her journey to becoming a fashion blogger, making her company Lapo Lounge, and keeping her content feeling fresh.

Have you used clothing as a form of self-expression from a young age?

Absolutely! Growing up in New York, I was always inspired by the fashion around me and I felt like I couldn’t leave the house without looking put together because everyone was so well-dressed. They don’t call it the fashion capital of the world for nothing! In high school, I had to wear a uniform – a white- collared shirt and black pants which I was not a fan of at all. Like most teenagers, I wanted to develop my own personal style so I started playing with adding different accessories to spice up the uniform. Like changing my shoelaces to a different color every week, adding a lightweight scarf or a colorful belt. I also used to go to Forever 21 and buy some funky chandelier earrings. I think that was the moment when I started experimenting with my style and developed my love for fashion as a form of self-expression. So in a roundabout way, having to wear a uniform to school brought out that creativity in me.

Initially, did you start sharing your outfits online and it grew to become something bigger, or were you always hoping to break into the industry through social media?

The former. Around 2010 when fashion blogging was just becoming a thing, I remember discovering a few fashion bloggers who I admired and thought that I had something to contribute to the space. So I started a blog of my own and named it OpalbyOpal – and I am still running it to this day! This was while I was in college, so I had a lot of free time to browse the Internet. I saved up and bought a Canon Rebel T2i camera, recruited my sister to be my photographer and we just went out and shot on the streets mostly in my neighborhood. The fashion blog was also a way for me to experiment and develop my style further. I would then upload the photos to my blog and other platforms that used to be big at that time like Tumblr and Lookbook.nu. What started as a fun side project that I did in my free time became something bigger once I got emails from a few magazines like Grazia UK and Cosmopolitan to feature my style. This definitely gave me the boost and motivation to continue blogging and I think I did my first paid collaboration around 2016. That was the moment I realized that fashion blogging was a lucrative business that I could pursue further.

Due to the pandemic content creators had to get creative while stuck at home. How has the pandemic changed the way you gather your content or what you post, if it has at all?

I think everyone had to adjust to dealing with the pandemic and spending more time at home. I actually spent a good portion of 2020 working on different home projects as I had just moved into a new space. Mostly trying to make my apartment feel homey and also photo and video-friendly. So now I call it my little “studio” because I can shoot a lot of content right at home. I think finding these little wins and turning negative situations into something positive is a good way to cope in general. And I’ve seen the creatives on all platforms getting more creative (no pun intended) and filming a lot more content at home – be it getting ready with me, with nowhere to go in particular. Or filming home DIY projects. Home workouts. Skincare routines. House plants and how to care for them. The conversations happening around mental health and self-care, in general, is another topic that I am happy is being given more attention. 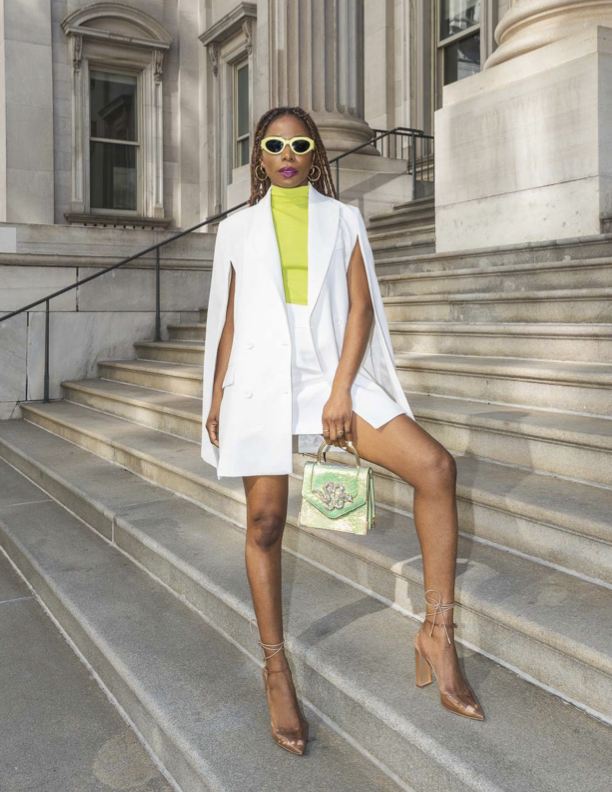 Tell our readers about Lapo Lounge. What motivated you to create your own line of belts?

I’ve always loved accessorizing! It’s always been one of my go-to tips for elevating one’s style. Just like the right seasoning can turn a bland dish into something delicious, jewelry, belts, and hair accessories can elevate any outfit. I’ve always gravitated towards chain belts because of how versatile they are – you can rock them with jeans, slip dresses, trousers, blazers…and unlike traditional leather belts, they are easy to adjust to fit any waist size. And once you put them on, you can style them in many different ways – loop them over once or twice, layer multiple belts for a maximalist approach, let them hang off your hips for a more relaxed fit (I did a video series on how to style chain belts on our Instagram @LapoLounge). My fianceé jokingly calls me “the Queen of chain belts.”
As for starting my own line, I just did it out of necessity. Most of the belts that I have in my collection are vintage and most brands that made them don’t even exist anymore. I tried going the fast fashion route but the options I found were almost like gold-plated plastic as opposed to real metal options. I was going to an event once and this so-called belt literally broke in two when I was getting into an Uber. I wanted to make an item that you can wear over and over and even pass down as a modern heirloom. And this is where Lapo Lounge came from. 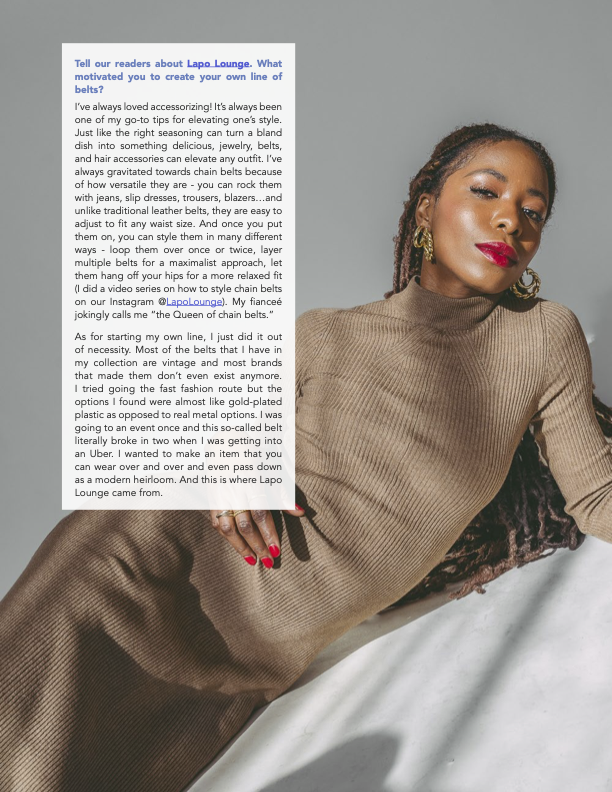 How do you go about choosing the color and type of chains for the belts?

It’s mostly my personal preferences and style really. Before creating anything, I ask myself – is this something I see myself wearing? If the answer is yes, then I go ahead with it. I started with a simple line of gold and silver belts because both of these metals are classic and timeless. Oh and you can totally use our belts as chains for your bags too! So that’s what I was drawn to – durability and versatility of use. But I am hoping to expand to other accessories as well – we just launched hair clips and I want to expand into jewelry and home next. So really the goal of Lapo Lounge is to be more of a lifestyle brand that aligns with my personal vision of quality living.

Creating a business can lead to a lot of ups and downs. What have you learned about yourself through creating Lapo Lounge?

Oh, I am still very much learning. I think patience in approaching things and learning to do things the right way is something I had to wrangle with. I can be impatient sometimes and want to see results right away but developing your brand and especially building it from the ground up can take time. It took Telfar Clemens over 15 years of running his brand before he saw the success that he is seeing now with Telfar. So in the grand scheme of things, I am definitely keeping my eyes on a larger story that I am trying to tell with Lapo Lounge. I don’t want to build just a brand, I want to build an empire. And empires take time.

Content creation has changed so much in recent years due to the influx of creators on platforms such as TikTok, Instagram, and YouTube. How have you kept your content feeling fresh to attract new followers?

It’s definitely a challenge but really about finding a balance between staying true to yourself and not being afraid to try new things. Sure, when TikTok just started, I think it earned a reputation as a platform for “TikTok” dancing and was sort of looked down upon by anyone older than Gen-Zs but that platform is so much more than just dancing now. You can find any niche of creatives on it – from comedy to fashion, finance, and beyond…I mean there are so many rabbit holes that you can go down on TikTok. So I think doing what feels true and most authentic to yourself is what will help you carve out that niche. As much as I think my dance skills are amazing I always had a gravitational pull toward fashion and that’s what I’m trying to pass along to my audience.One of the biggest trends that I’ve definitely seen emerge since I started blogging back in the day is the move from photo to video content. If you are not producing video content yet – Reels, Youtube Shorts, TikToks, you should start now. And even in this space – I remember when long-form YouTube vlogs (15-25 minutes) were the hottest thing. Compared to 15-30 seconds of most video content now. So even with my editing, I experiment with faster transitions and am learning how to tell a story in a more concise fashion. That’s one way I’ve been trying to keep my content feeling fresh and relevant.

What advice do you have for those who are interested in working in the fashion industry?

I think this industry very much rewards self-starters and those who are willing to carve out their own niche. Create opportunities for yourselves. If you want to be a fashion journalist, start a blog and start covering that space. If you want to be a photographer – start shooting and create a portfolio. Fashion blogger – get on all of the platforms that I’ve mentioned above. Whatever you decide to do, be proactive and put your work out there. From there, you can leverage your portfolio and the experience that you’ve gained along the way to either get a job in the industry or start working for yourself.

Get NYOTA Magazine Issue #27 at issuu.com 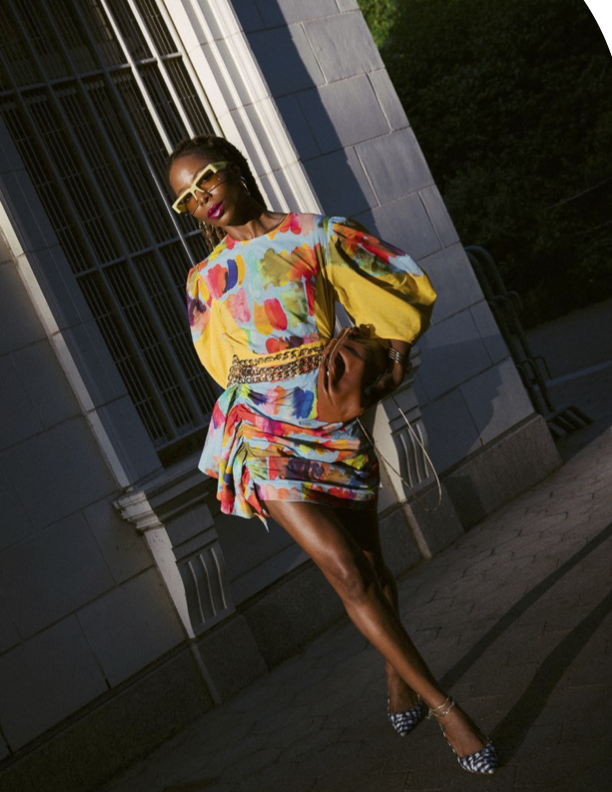 Monday Wellness: How to Infuse Water at Home

How To Clean Your Jewelry At Home

NYFW in Times of Quarantine and Social Distancing